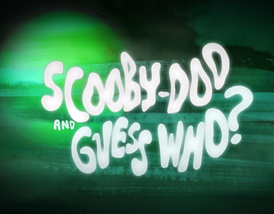 Season 1
REVENGE OF THE SWAMP MONSTER! 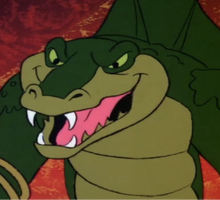 Original Air Date: Thursday, June 27, 2019
Villain: Swamp Monster
Guest Star: Chris Paul
Shaggy is invited to caddy for famous NBA star Chris Paul in a charity golf tournament. When the tournament is plagued by a swamp monster, Shaggy and the gang have to help Chris solve the mystery, so the tournament can go on and raise enough money to save a children's art school.

Trivia:
- The scoreboard incorrectly lists Burt Friendly as "A. Friendly."
- When the swamp monster chases Chris, Shaggy and Scooby on the golf cart, the cart switches from yellow to orange.
- Chris Paul's quote while trying to trick the swamp monster, "There are no mistakes, only happy accidents." is a cultural reference to famous painter Bob Ross.
A MYSTERY SOLVING GANG DIVIDED 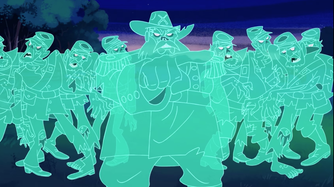 Original Air Date: Tuesday, July 2, 2019
Villain: Ghost Zombie Civil War Soldiers
Guest Star: The Funky Phantom Crew / Abraham Lincoln
​While visiting a Civil War field, the gang runs into another mystery solving gang, The Funky Phantom Crew, who acts snobbish and standoffish. This leads to a competition between the two to solve the mystery of some ghost zombie Civil War soldiers haunting the area. To make things even stranger, the ghost of Abraham Lincoln appears in an attempt to stop the two groups from arguing.

Trivia:
- Scooby and Shaggy laugh at Speed Buggy, though Scooby met Speed Buggy in The New Scooby-Doo Movies. Continuity-wise, this episode either takes place before "The Weird Winds of Winona" or takes place in an entirely different continuity.
- Episodes were typically released on a Thursday on the Boomerang streaming service, but this episode was released two days earlier, on a Tuesday, likely because the Fourth of July (Independence Day) fell on a Thursday.
PEEBLES' PET SHOP OF TERRIBLE TERRORS! 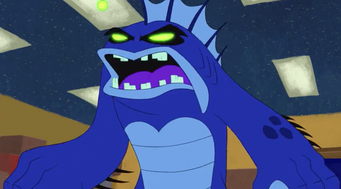 Original Air Date: Thursday, July 11, 2019
Villain: Fish Creature
Guest Star: Wanda Sykes / Magilla Gorilla & Mr. Peebles
Scooby begins freaking out after the gang runs out of Scooby Snacks. To appease his appetite, they stop at pet store to get some more. Little do they know, a monstrous creature has hatched from an egg, and is capturing anyone who dares to enter the store! 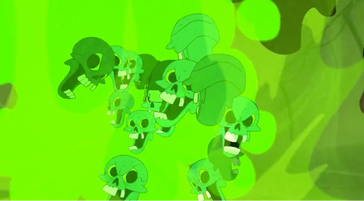 Trivia:
- The Screaming Skulls laughing is a recycled sound effect from the Phantom in "Hassle in the Castle."
OLLIE OLLIE IN-COME FREE 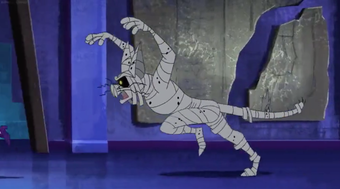 Trivia:
- The Antique Dealer looks exactly like Professor Hyde White from "What a Night for a Knight."
- The mummy's catchphrase and the statue are references to "Scooby-Doo and a Mummy Too."
THE SCOOBY OF A THOUSAND FACES! 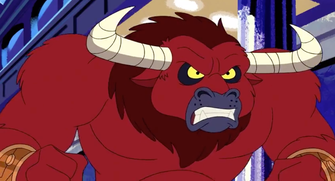 Original Air Date: Thursday, August 1, 2019
Villain: Minotaur
Guest Star: Wonder Woman
The gang is attacked by a rampaging minotaur at a museum, only to have Wonder Woman save their lives. After Wonder Woman offers to train the girls, a rift in the gang occurs when the boys begin to feel jealous.
THE CURSED CABINET OF PROFESSOR MADDS MARKSON!
Original Air Date: Thursday, August 8, 2019
Villain: Ghost of Professor Madds Markson / Rabbit Monster
Guest Star: Penn and Teller
The gang visits a haunted hotel in Las Vegas, where they are offered a million dollars if they can make it the entire night. The gang also runs into the famous Penn and Teller, who help them in solving the mystery of the ghostly magician and his rabbit monster.

Trivia:
- When walking in the hall, the gang sees a painting which features the Witch Doctor from "Decoy for a Dognapper" (from Scooby-Doo, Where Are You?)
WHEN URKEL-BOTS GO BAD! 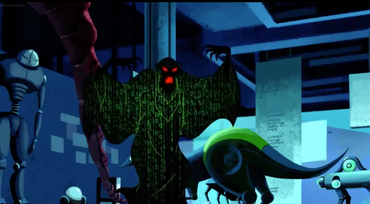 Original Air Date: Thursday, August 15, 2019
Villain: Technomancer
Guest Star: Urkel
The gang is chased by a malicious robot, and quickly run into its owner, Steve Urkel. After a significant amount of pleading, the gang reluctantly agrees to help the desperate Urkel recover his robot from the hands of the evil Technomancer.

Trivia:
- The Technomancer is a recycled design of the Green Ghosts from "A Night of Fright is No Delight" (Scooby-Doo, Where Are You?)
THE FASTEST FOOD FIEND! 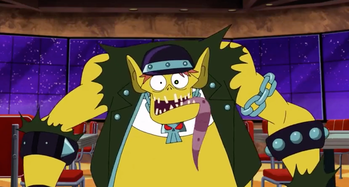 Original Air Date: Thursday, August 22, 2019
Villain: Spectral Speedster
Guest Star: Jim Gaffigan
The gang competes in an eating competition where they run into Jim Gaffigan, a famous comedian and fast food aficionado. However, a spectre attacks the competition and the gang has to solve the case.
ATTACK OF THE WEIRD AL-OSAURUS! 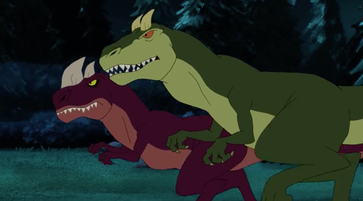 Original Air Date: Thursday, August 29, 2019
Villain: Dinosaurs
Guest Star: Weird Al Yankovic
The gang runs into Weird Al on a trip to the mountains, only to find his accordion-playing camp deserted due to a dinosaur. Much to their annoyance, they decide to help Weird Al figure out what's going on while he annoys them with his silly songs.
NOW YOU SIA, NOW YOU DON'T!

Trivia:
- Scooby-Doo licks his face in a similar way to how he did it in "Foul Play in Funland" from Scooby-Doo, Where Are You?
QUIT CLOWNING! 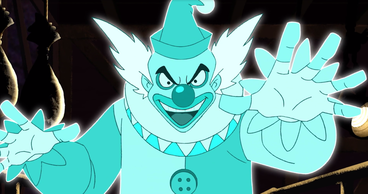 Original Air Date: Thursday, September 12, 2019
Villain: Ghost of Pazzo the Clown
Guest Star: Kenan Thompson
The gang helps out with Kenan Thompson's phone-a-thon at a television station, but they quickly run into a mystery when the ghost of Kenan's favorite childhood clown tries to shut the station down.
WHAT A NIGHT, FOR A DARK KNIGHT! 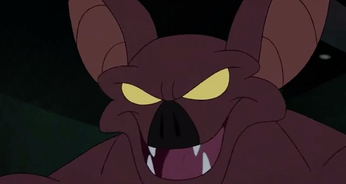 Original Air Date: Thursday, September 19, 2019
Villain: Man-Bat
Guest Star: Batman
After Daphne's uncle Alfred is mysteriously captured, the gang helps Batman (much to his annoyance) in searching for him. However, they are quickly confronted by the Man-Bat, one of Batman's most sinister villains.

Trivia:
- Miller & Frank Department Store is a reference to Frank Miller, who wrote the famous 1974 comic book The Dark Knight Returns.
- In the DC Comics run of Batman in the 1970s, Alfred actually has a niece named Daphne, so this episode fits with that continuity.
- Fred being pulled into a wall is a reference to the instance where that happened in "Never Ape an Ape Man" from Scooby-Doo, Where Are You?.
THE NIGHTMARE GHOST OF PSYCHIC U! 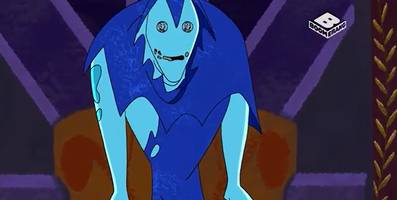 Original Air Date: Friday, February 7, 2020 (Online)
Villain: Nightmare Ghost
Guest Star: Whoopi Goldberg
The gang visits a creepy school for psychics which Whoopi Goldberg attends, but they quickly find themselves wrapped up in another mystery after a Nightmare Ghost begins haunting the institution.

Trivia:
Whoopi Goldberg's psychic abilities were a callback to the 1990 film Ghost, which she also starred in as a psychic.
THE SWORD, THE FOX AND THE SCOOBY-DOO!

Original Air Date: Tuesday, February 18, 2020 (UK)
Villain: Fox Monster
Guest Star: Mark Hamill
The gang takes a trip to Japan where they meet Mark Hamill during his class reunion. When Mark's favorite teacher is kidnapped, the gang has to help Mark find him and stop the fox monster who did it.
ONE MINUTE MYSTERIES! 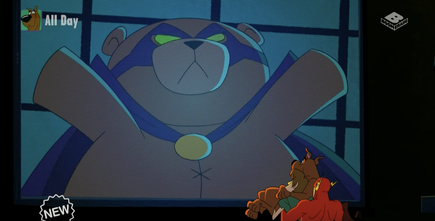 Original Air Date: Wednesday, February 19, 2020 (UK)
Villain: Evil Teddy Bear
Guest Star: The Flash
The gang becomes irritated when The Flash begins constantly interfering with their mysteries, so Shaggy and Scooby can go eat with their friend Barry Allen. However, they soon learn they have bigger problems when a gigantic evil teddy bear kidnaps Fred, Velma and Daphne.

Trivia:
- Scooby throws a key out the window, then jumps back in the window and unlocks it from the inside, which is a reference to the same scene where he does so in "Spooky Space Kook" from Scooby-Doo, Where Are You?
- This episode features a recreation of the gang setting traps for classic Scooby-Doo, Where Are You? villains with The Flash, including The Phantom, Captain Cutler, Miner 49er, the Witch, the Zombie, Space Kook, Redbeard, the Snow Ghost, and The Creeper.
HOLLYWOOD KNIGHTS!

Trivia:
- The office in the secret passage looks eerily similar to the office in "Never Ape an Ape Man" from Scooby-Doo, Where Are You? 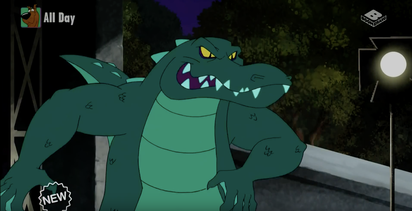 Original Air Date: Friday, February 21, 2020 (UK)
Villain: Gator-Man Monster
Guest Star: Halsey
Scooby-Doo surprises Shaggy with entering him into a poetry contest with famous singer-songwriter Halsey. When a gator-man monster attacks the poetry contest, the gang and Halsey work together to solve the mystery in the New York Underground.

Interesting facts:
- Halsey got her stage name from Halsey Street in the real-life New York Underground.
FEAR OF THE FIRE BEAST!

Original Air Date: TBA
Villain: Crazy Carl
Guest Star: Jeff Dunham / Darci Lynne Farmer
Scooby and the gang attempt to escort a ventriloquist dummy to a competition, where they run into the judges, Jeff Dunham and Darci Lynne Farmer. The gang quickly has another mystery on their hands after the dummy suddenly becomes possessed, and begins stalking them all around town.
DANCE MATRON OF MAYHEM!

Original Air Date: TBA
Villain: Ghost of Madame Zobrinsky
Guest Star: Maddie Ziegler
Dancer Maddie Ziegler is cursed by the ghost of Madame Zobrinsky, and the only way to break the curse is to teach someone how to do a seemingly impossible dance move called the Zobrinsky Triangle. Good thing Shaggy and Scooby happen to be around for Maddie to teach...but can the clumsy duo really help Maddie break the horrible Zobrinsky Curse?
THE WEDDING WITCH OF WAINSLY HALL!

Trivia:
- Construction Worker is misspelled as "Contruction Worker" in the credits for this episode.
- The title is possibly a parody of the alliterative New Scooby-Doo Movies title, "The Haunted Horseman of Hagglethorn Hall."
A RUN CYCLE THROUGH TIME! 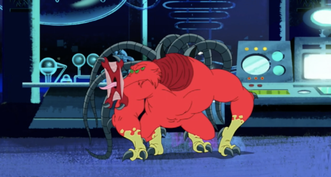 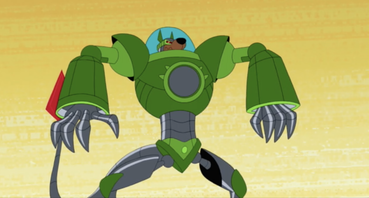 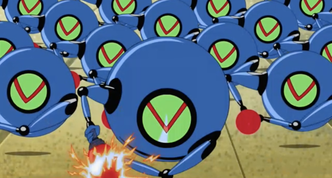 Original Air Date: TBA
Villain: Chronobeast / Supreme Leader / Robo-Drones
Guest Star: Malcolm McDowell
After the Mystery Machine breaks down in the desert, famous actor Malcolm McDowell helps out the gang and brings them to his laboratory, where he has built a time machine in the form of an amusement park carousel. When an inter-dimensional monster attacks the lab, Malcolm and the gang are forced to travel through time, where they see a dystopian future of Scooby becoming an evil dictator who has taken over the world with his robo-drones.

Trivia:
Between 8:25 and 8:50 of the episode, Velma appears to be riding a unicorn on the carousel time machine in close up shots. However, in long-distance shots, she is shown to be riding a bicycle.
I PUT A HEX ON YOU! 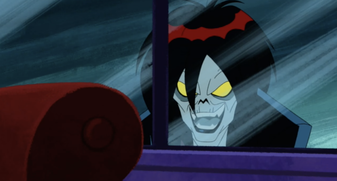 Original Air Date: TBA
Villain: Ghost of Ester Moonkiller
Guest Star: Hex Girls
After The Hex Girls hire Daphne on as their makeup artist, the gang attends one of their concerts. Strange things begin happening when Thorn receives a cursed guitar from an anonymous fan, and the ghost of a famous rockstar appears at the concert.

Trivia:
- The picture of the "younger versions" of the Hex Girls features their original Witch's Ghost designs.
THE HIGH SCHOOL WOLFMAN'S MUSICAL LAMENT! 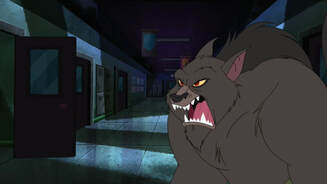 Original Air Date: TBA
Villain: Werewolf
Guest Star: Christian Slater
In this full-length musical episode, the gang helps Christian Slater redo his high school prom, after his first one was cancelled due to a wolfman.

Trivia:
- This is the first musical episode of the Scooby-Doo franchise.
- The following classic monsters appear in the first song, "The Mystery Machine's on Broadway!": The Phantom, Captain Cutler, Miner 49er, Charlie the Robot, Zombie, Space Kook, Ghost of Redbeard, Green Ghost, The Creeper, The 10,000 Volt Ghost and the Headless Horseman. The Headless Horseman is misidentified as the "Headless Specter" by the gang in the song, even when the design is clearly the Headless Horseman from The Scooby-Doo Show.
- During "The Mystery Machine's on Broadway!" numerous clips from previous episodes of season 1 of Guess Who are shown.
- Scrappy-Doo is briefly referenced by Christian Slater in the song "Diners for Dinner, Dinner for Diners," when Christian says "I love hearing a dog talk, and you know I don't mean Scrappy!"
SPACE STATION SCOOBY 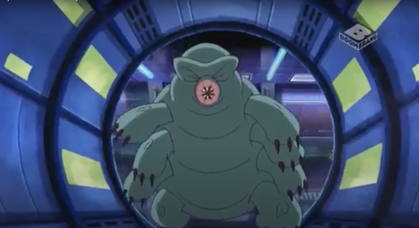 Trivia:
- This episode did not air in several countries, including Spain, Poland, and possibly others, due to an active sexual assault investigation against Neil deGrasse Tyson during the time frame when season 1 was airing.
- The background in the area where they capture the Tardigrade Monster looks to be inspired by the opening background of The New Scooby-Doo Movies intro.