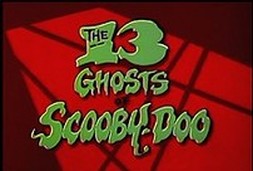 TO ALL THE GHOULS I'VE LOVED BEFORE
Original Air Date: Saturday, September 7, 1985
Villain: All Demons / Werewolves / Weerd & Bogel
The gang's plane crash-lands in a town where the residents all turn into werewolves at night. Meanwhile, two evil spirits attempt to lure the gang into a temple to open a chest full of demons which only mortals can open.

Trivia:
- The number of Were-Daphne's fingers varies from four to five depending on the scene, which is an animation glitch.
- Weerd and Bogel's game show Let's Make 'Em Squeal with Haunty Mall parodies Let's Make a Deal and its host, Monty Hall.

SCOOBRA KADOOBRA
Original Air Date: Saturday, September 14, 1985
Villain: Maldor the Malevolent / Monster Trees & Plants / Dragon-Rabbit / Rat Guards (aka Ratfinks)
The gang goes into Zagras the Wizard's castle, where Daphne is put under the "Sleep of the Centuries" by Maldor the Malevolent - the first of the 13 ghosts.

Trivia:
- Scooby hums the theme to The New Scooby-Doo Movies while cooking the magic soup.
- Daphne is laying on her chest when Maldor puts her to sleep. However, later on in the episode she is shown on her back.
- There is a large plothole in this episode because Scrappy is also a Great Dane, and thus should have been able to break the Sleep of the Centuries curse. A possible theory to fix this is that Scrappy's father could have been another type of dog, and a purebred Great Dane was necessary for this curse.
​
ME AND MY SHADOW DEMON 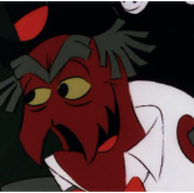 Original Air Date: Saturday, September 21, 1985
Villain: Queen Morbidia / Shadow Demon / Befuddle Manor Monsters / Griswald
The gang goes into an old castle pretending to be exterminators, but are followed at every turn by Queen Morbidia and her monsters, who want to be rid of them.

Trivia:
- This episode is the only one on the Complete Series DVD set to have a title card.
- Griswald's laugh is the recycled sound effect of Mumbly/Muttley laughing.
​
REFLECTIONS IN A GHOULISH EYE
Original Air Date: Saturday, September 28, 1985
Villain: Mirror Demon / Weerd & Bogel
In Marrakesh, the gang goes to a convention where a demon is lurking with the power to trap people in an alternate mirror world.

THAT'S MONSTERTAINMENT
Original Air Date: Saturday, October 5, 1985
Villain: Zomba / Demon Cameramen / Frankenscoob Monster
Daphne and the guys decide to stay up for the 2 AM Spine-Tingler Movie with ghoulish horror-host Zomba, who sucks them into the TV. Scooby and the gang are forced to act out the movie as the main characters, while Zomba chases them throughout the movie and searches for the Chest of Demons.

Trivia:
- This episode is a parody of Frankenstein.
- When Scooby eats a Scooby Snack, Popeye is parodied.
- Ranna-Rarerra on the MGM-esque parody logo is an obvious reference to Hanna-Barbera.
- Cemetery is misspelled on the sign as "cemetary."
- In the scene where Zomba comes down the stairs, her misanimation makes her look somewhat creepier than her correct design. 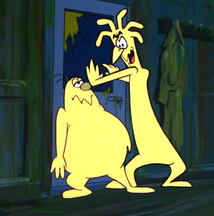 Original Air Date: Saturday, October 12, 1985
Villain: Cyclone Demon (Maldor, Morbidia, Mirror Demon, and Zomba combined) / Zombie Captain & Passengers / Weerd & Bogel
After Scooby-Doo has seen one ghost too many, the gang decides to take a cruise to calm Scooby's nerves - unaware that the ship is heading straight for the Bermuda Triangle. Even worse, the ship is full of passengers that are ghosts.

Trivia:
- The Zombie Captain is never blatantly confirmed in the episode to be one of the thirteen ghosts, however, Scooby-Doo and the Curse of the 13th Ghost implies that this was one of the ghosts.

A SPOOKY LITTLE GHOUL LIKE YOU
Original Air Date: Saturday, October 19, 1985
Villain: Nicara / Cemetery Ghouls / Weerd & Bogel
Vincent falls for a girl named Nicara and proposes to her, but the gang doesn't realize that Nicara is actually one of the 13 ghosts with the power to make any warlock fall madly in love with her.

Trivia:
- Voudini is a parody of Houdini, a famous magician.

​WHEN YOU WITCH UPON A STAR
Original Air Date: Saturday, October 26, 1985
Villain: Marcella (aka The Demon Mist) / Brewski Sisters
​The gang's relaxing dinner at Vincent's house turns into a nightmare when Marcella and her three clumsy witch companions from releasing her fellow spirits with Spell #13 from the Black Book of Spells.

Trivia:
- Clips from this episode were used in a Christian documentary called Deception of a Generation which condemned the series as "evil" for exposing children to witchcraft.
​
IT'S A WONDERFUL SCOOB
Original Air Date: Saturday, November 2, 1985
​Villain: Time Slime / Weerd & Bogel
Scooby quits the gang after reliving some of his most terrifying ghost-chasing moments, leaving the gang no choice but to replace him with Bernie Gumpshure - a lazy sheepdog who has no interest in anything but sleeping. Vincent Van Ghoul must show Scooby what will happen to the world if he doesn't stop Time Slime from taking over the universe.

Trivia:
- U.S. President Ronald Reagan (not voiced by himself) appears in this episode giving a public service announcement. He has a jar of jellybeans on his desk, a reference to Reagan's love for Jelly Belly brand jellybeans.
- This episode parodies the film It's a Wonderful Life.
- Flim Flam is erroneously shown to only have four fingers during one of the auditions.
​
​SCOOBY IN KWACKYLAND
Original Air Date: Saturday, November 9, 1985
Villain: Demondo / Lousy Lizard / Weerd & Bogel
During a spring clean of Vincent's house, the gang is sucked into a comic strip by Demondo - one of the 13 ghosts who is trying to release his fellow spirits.

Trivia:
- Scrappy loses his eyebrows at one point when Platypus Duck talks to the wizard.
- The Platypus Duck song is somewhat similar to the theme song for The Great Grape Ape Show. 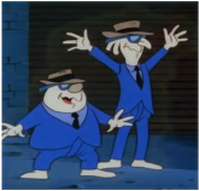 Original Air Date: Saturday, November 16, 1985
Villain: Rankor / SAPS / Weerd & Bogel
Vincent is turned to stone by the Eye of Eternity, and all hope seems lost. Weerd and Bogel offer to help the gang get Vincent back to normal within 24 hours, but can the gang really trust them?

Trivia:
- Somehow, the gang acts as if they do not know Weerd and Bogel in this episode, despite them being in nearly every episode so far.
- The fact that Rankor is attempting to get into SAPS does not logically make a lot of sense, as supposedly he's one of the 13 most powerful ghosts upon the face of the Earth. He also acts incredibly stupid and bumbling, to the extent of willingly going into the Demon Chest to avoid the sunlight.

THE GHOULIEST SHOW ON EARTH
Original Air Date: Saturday, November 23, 1985
Villain: Phantasmo / Circus Demons / Weerd & Bogel
Scooby goes back to his hometown to have a reunion with his parents. They meet up at a circus, where Flim Flam becomes obsessed with the circus, and Shaggy and Scooby discover that everyone in the circus is a demon.

HORROR-SCOPE SCOOB
Original Air Date: Saturday, December 7, 1985
Villain: Zimbulu / Zombies / Weerd & Bogel
Scooby and the gang go on live TV with Vincent's old friend Boris Kreepoff, only to have the demon chest stolen from their very grasp. They go to the medium Telullah to help, but everywhere she tells them to go seems to have grave danger.

Trivia:
- This is only the 11th or 12th ghost (depending on your view of Captain Ferguson) to be captured. This is because the series was cancelled before all the ghosts could be captured. However, in 2019, a movie entitled Scooby-Doo and the Curse of the 13th Ghost was released, which finally gave closure to the series after 33 years. You can find out more information on that film in the movie guide.
- Because it's a well known fact that all TV writers are magical and can see into the future, somehow the spelling of the words on the Scooby Snacks box briefly changes to "Scooby Snax" to align with the name of a certain Scooby fan site which would be created 29 years later. Arguably, this is not an animation mistake, but rather a super cool future shout-out to the very site you are on right now. xD